Richard has completed his first marathon – and is currently training for his second – to raise vital funds for Worldwide Cancer Research in memory of his brother Tim, who passed away a decade ago after a devastating diagnosis revealed a brain tumour that had already spread to other parts of his body.

With last year's London Marathon cancelled due to the pandemic, Richard clocked up the miles as part of the Edinburgh Marathon Virtual Challenge instead. This year he plans to start more new cancer cures by running in the rearranged London Marathon in October - a few months after his 50th birthday.

"2020 would have been 10 years since my brother ran the London Marathon himself, so it felt like a fitting time to try it."

I only ran my first 10k in 2018 and then I ran a couple of half marathons as a build-up to the main event. It was tough - a real baptism of fire.

Tim played rugby and he also studied dance in college, so I decided to complete the marathon wearing a tutu and a scrum cap in honour of his two passions - rugby and ballet. I must have been quite a sight running around on my own in that outfit!

"Tim was only 42 when he passed away in 2011. It was quick - he was diagnosed in February and we lost him in July, two months after his 42nd birthday."

The tumour spread through his body quickly. He had radiotherapy treatment but the cancer was already very far gone by the time he was diagnosed.

Tim's children were very young when they lost their father - one, four and six years old. I'm godfather to his middle son and we're all very close. I also have two older brothers so we're a big family, we see a lot of each other.

Everyone is very supportive of my running and I'm now back in training for the London Marathon in October - I look forward to getting my tutu and scrum cap out again! 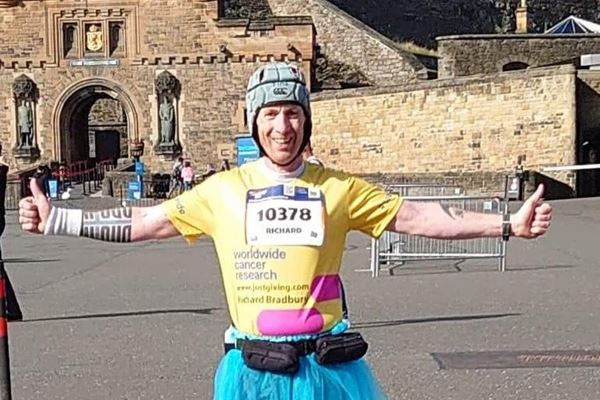 "Every step I run is for my brother, so raising funds for an amazing charity like Worldwide Cancer Research feels like a great way to honour his memory."

Being able to contribute to the important and life-changing research the charity funds across the world is just incredible.

I've been overwhelmed by the response I've had so far. I've already reached my target of £2,250 so now I'm aiming for £3,500. Hopefully I can keep going beyond that!

We are so grateful to all of our incredible supporters, like Richard, who fundraise tirelessly to help us continue our ground-breaking research - so that we can start new cures and save more lives in the future.

One day we will end cancer - will you become a Curestarter today?