Professor Kairbaan Hodivala-Dilke has been turning cancer research upside down with her innovative ideas on how to treat cancer. We sat down with her to find out more.

“I always say to people, you never see cancer walking down the road by itself, cancer needs us to grow.” says Professor Kairbaan Hodivala-Dilke, explaining how her ideas are turning research upside down.

“Just like any organ in our body, tumours need a blood supply. And tumours get that supply through the blood vessels. So if we can stop those blood vessels from feeding the tumour, the idea is that we would be able to stop the tumour from growing.”

For over 25 years, researchers have been working out how to stop the blood vessels from growing and there are now drugs, called antiangiogenics, available. But they don’t work by themselves and they don’t work in all cancer types, so we may need a vast repertoire of antiangiogenic drugs to tackle the molecular diversity found in cancer.

There is another glaring problem with antiangiogenic drugs. Their role is to stop blood vessels from growing and feeding the tumour. Yet, we need to use these drugs in combination with treatments that are injected into our veins, such as chemotherapy. This creates a problem with antiangiogenic drugs actually stopping chemotherapy from getting into the cancer where it can have maximum impact.

Cilengitide is one of the antiangiogenic drugs that research has shown to be promising enough to take into clinical trials for a type of brain cancer called glioblastoma. However, the drug proved not as effective as hoped with no overall improvement on the survival of patients. Through her work on angiogenesis, Kebs discovered that at low doses cilengitide can actually enhance the number of new blood vessels growing into a tumour. This surprising finding, that a drug designed to stop the growth of new blood vessels could do the opposite at low doses, pushed Kebs’ research in an unexpected direction.

In 2012, Kebs received funding from Worldwide Cancer Research to study how low doses of cilengitide could be used to effectively treat cancer. Her research revealed, in mice, that combining low dose cilengtitide, with a drug that causes blood vessels to dilate and widen, led to an increase in the amount of gemcitabine (a chemotherapy drug) that was able to reach the tumours. Importantly, Kebs’ work showed that this combination of treatments could slow down or halt tumour growth in mice with lung and pancreatic cancer.

The success of Kebs’ project led to her securing further funding in 2016, when her team turned their attention to lung cancer. “Historically, lung cancer has always had a very poor prognosis. More recently, there are new drugs on the market called immunotherapies, which help our own immune system to attack cancer better. And this seems to be having a significant benefit for about half of lung cancer patients. So that’s great, but we’re still left with 50% for whom immunotherapy isn’t working properly,” explained Kebs.

Kebs has just launched a new project with funds raised by supporters of Worldwide Cancer Research to test her treatment strategy in lung cancer:

“The work that we’re doing right now is very important because it’s got a crucial clinical application for cancer patients.”

Kebs’ research embodies everything that Worldwide Cancer Research represents as a charity. We look for the most pioneering and innovative ideas that could revolutionise our understanding of cancer and how to beat it. These novel projects that go against the grain are something we believe are worth investing in, as this bold approach can open up completely new avenues of research.

“We looked back on two decades of angiogenesis research and thought ‘what do we really want to achieve?’ If getting rid of the blood vessels by themselves isn’t enough, it means that we don’t understand the biology well enough yet. So that’s not to say that stopping blood vessels growing won’t ever work as a cancer treatment, but it leaves us with a problem - how to deliver and make cancer therapies work better for more patients.”

“Of course, our idea of increasing the number of blood vessels growing into a tumour met a lot of resistance from the field. But what’s really interesting, is if you talk to the cancer doctors, the people treating patients, they think it’s a fantastic idea.”

Our idea met a lot of resistance from the field. But what’s really interesting, is if you talk to the cancer doctors, the people treating patients, they think it’s a fantastic idea. 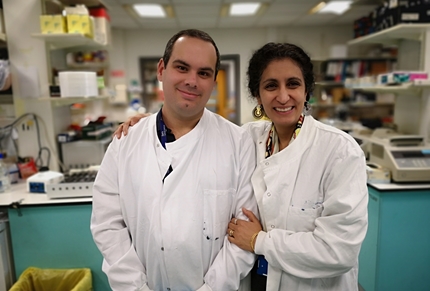 How we decide what to fund
Read more